Brugge – or Bruges in English and French – is a storybook town, and although this is our first visit, I would say that the storybook atmosphere is even greater when it is decked out for the Christmas season!

We left Cambridge on the train to King’s Cross Station in London, where we crossed the street to St. Pancras International Station. 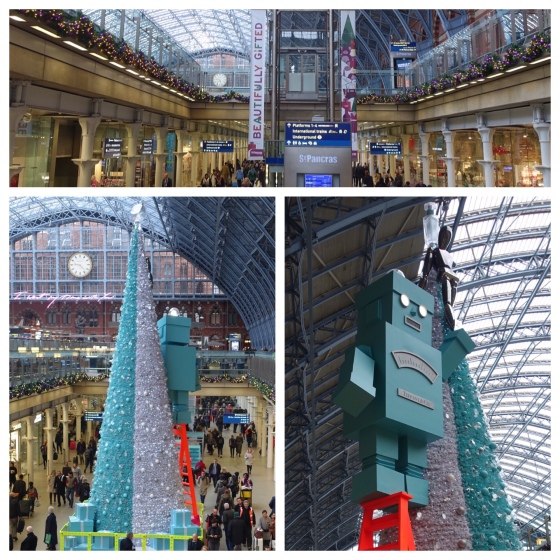 After a nice breakfast, we boarded the Eurostar train to the continent. This very comfortable train took us through the Chunnel and on a fast 2 hour trip to Brussels. In Brussels, we again changed trains and were off on a quick trip to Brugge (good that it was quick as we had to stand for about half the trip on a crowded train).

Arriving in Brugge, we hopped on a bus, walked a bit and arrived at our hotel – the Hotel Dukes Palace. This was a treat – a lovely hotel in what was originally a ducal palace. The atmosphere was so pretty, the room was spacious and well-appointed, the champagne breakfast was great and the service was impeccable, right down to the welcome drink in the lounge and chocolates on our pillows each evening. 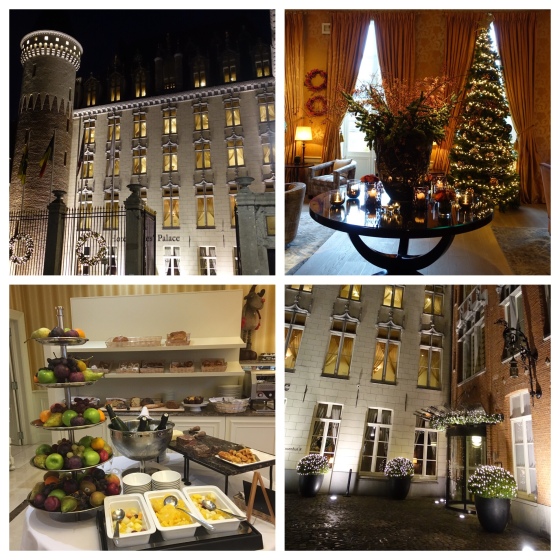 Bruges is a well-preserved Gothic city. As early as the 11th century, it was an economic powerhouse and it became one of the largest cities in the world (as large as London for a time). It prospered for centuries as a port and a cloth market, but by the 16th century, the harbour had silted up and the economy had collapsed. In the 20th century, tourists discovered its charm and it once again became a major destination. Visiting in the off-season was a definite plus in our books, as we are happy to put up with cool weather rather than fighting hordes of tourists.

We enjoyed the fun presentation of the history of the city at the Historium. An audio guided tour takes you on the journey of a young man during the 1430’s heyday of Bruges, using video screens, animatronic mannequins, fake fog and even smell-o-vision. Although a bit cheesy, it was an entertaining way to experience the city as it was.

There is a picture perfect view around every corner in Brugge. We walked to all corners of the central city, contained within a canal (formerly the moat). 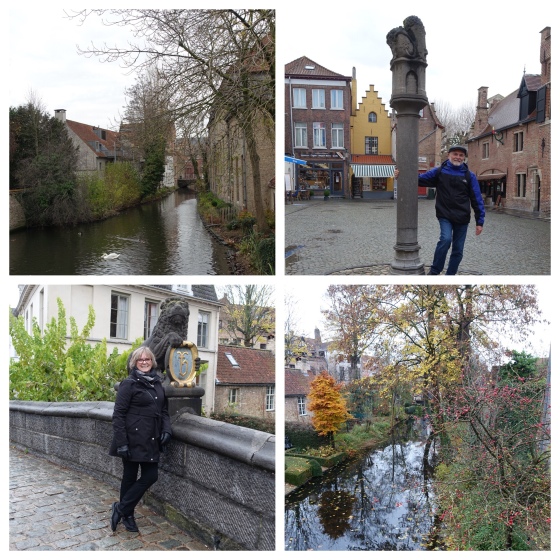 From late November to early January, Markt Square is filled with the annual Christmas Market. Numerous vendors offer their Christmas (and other) wares, and visitors partake of delicious food and drink – we enjoyed Gluwein, bratwurst and waffles.

Everywhere you look in Bruges, Christmas decorations abound. It was a lovely sight!

Belgium loves its chocolate, waffles and beer. Chocolate shops abound – and shockingly, we didn’t buy any. We will have to rectify that when we are in Brussels in a few days. We toured the De Halve Maan Brewery – an informative tour, including a delicious Brugse Zot at the end. 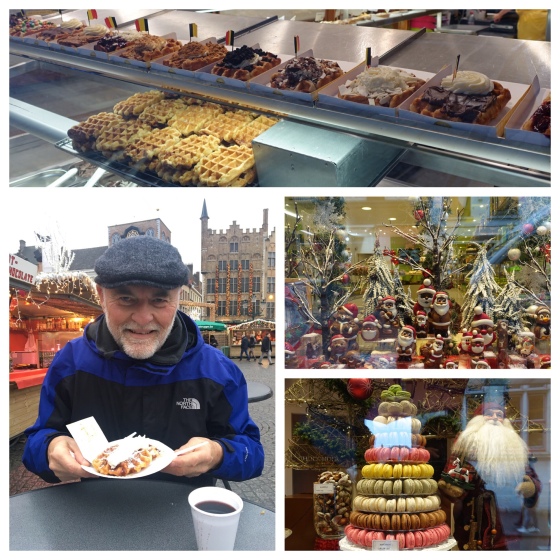 We had a delightful dinner at a small restaurant, t’Lammetje, recommended to us by Emily & Brad. We would further recommend it to anyone visiting Bruges.

We are now off on a few more trains, heading to our next adventure in Valkenburg, Netherlands. We will tell you about that in a few days.