We traveled south from Arcos de la Frontera to the Port of Tarifa, once again by Daytrip. Our driver Rosie provided us with excellent commentary on the area that we were travelling through.

Tarifa is mainland Europe’s southernmost town, whitewashed and Arab-feeling, with an old castle and a long stretch of wild Atlantic beachfront. We were only there long enough for a great lunch, but feel that it probably warrants at least an overnight visit.

From Tarifa, we caught the FRS ferry to Tangier. This was an efficient, comfortable way to travel and included on-board passport control (for those interested, we will provide more information on this in our upcoming Review and Recommendation blog). 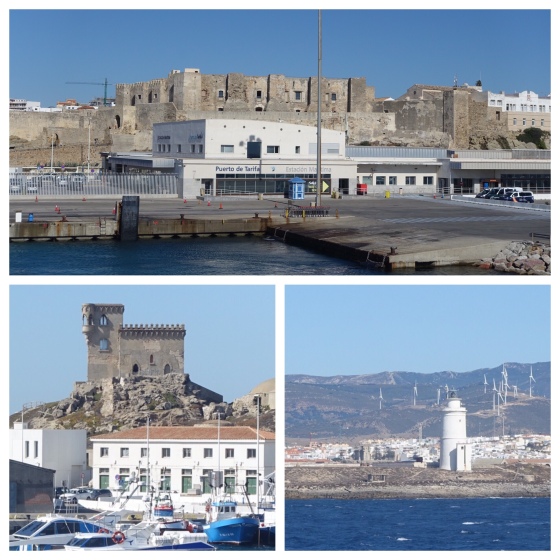 For Tangier, we had booked the Dar Chams Tanja. This riad (guesthouse) is owned by a retired French ex-pat couple, who are supported by their excellent staff. It is impeccably decorated and became our oasis in what was at times a chaotic city.

The Dar Chams staff had arranged for a taxi to meet us at the ferry. This was our first encounter with our new friend, Yahya, who navigated the windy, narrow streets to deliver us to the guesthouse.

We were warmly greeted and the welcoming Moroccan mint tea, served by the ever-present, friendly and efficient Abdul, was a lovely touch.

Dar Chams is located just below the lower Kasbah gate. A kasbah, found in most every Moroccan town, is an enclosed, protected residential area near a castle. Tangier’s kasbah occupies the upper quarter of the old town, has twisty lanes and is the location of a number of riads.

Tangier’s medina (old town) is a colourful and often confusing maze of narrow lanes, dead-end alleys and tiny shops selling ornate clothing, jewelry, produce and any number of other items. Guidebooks warn that the shopkeepers will harass you, but we didn’t find this at all – just an occasional invitation called out to enter the store. It’s an area where the locals live and gather – children playing in the lanes were common. 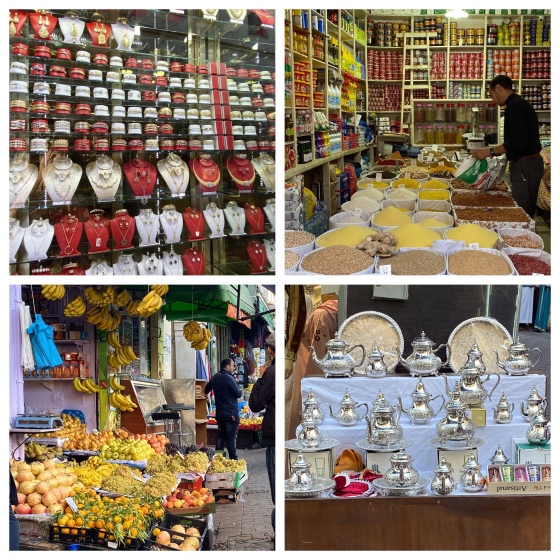 Breakfast on the rooftop terrace at Dar Chams was delicious and the views of the city and the sea were excellent.

Prior to our trip, we had asked Michelle, the Dar Chams proprietor, to book us a day tour and we were delighted to discover that our driver and tour guide was once again Yahya. 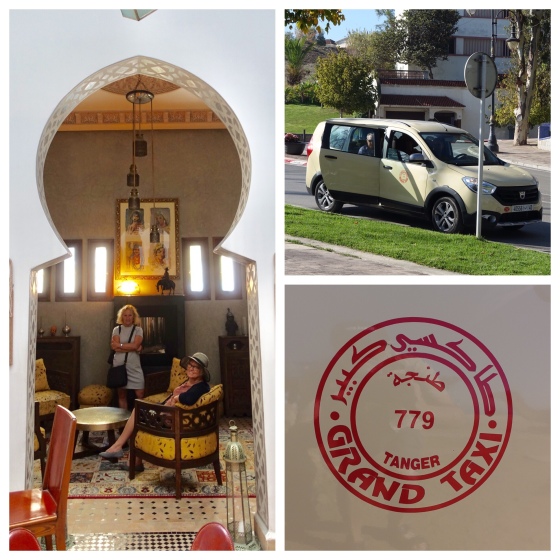 As we traveled, Yahya told us some of the history of Tangier. From the 1920s through the 1950s, Tangier was an ‘international city’ and was governed by as many as nine different powers, including France, Spain, Britain, Italy, Belgium and the Netherlands – not to mention Morocco. The city was a tax-free zone and became a booming area that attracted millionaires, artists, authors, and expat romantics. This was a golden age for the city.

After returning to Moroccan rule, the city was ignored by the government and suffered from this neglect. However, when King Mohammed VI was crowned in 1999, he began a campaign to restore Tangier to its former glory. Although this is still a work in progress, Yahya indicated that improvements have definitely been made.

On our way to the coast, Yahya drove us through La Montagne where the ‘very, very rich’ have compounds. Some of the notables are King Mohammed VI, the Emir of Kuwait and a Saudi prince or two. Their compounds are massive and heavily guarded.

On the coast, our first stop was at Cap Spartel, a promontory at the entrance to the Strait of Gibraltar. The lighthouse at Cap Spartel was the first to be erected in Morocco. It was inaugurated in 1864 and was in active use until just a few years ago. 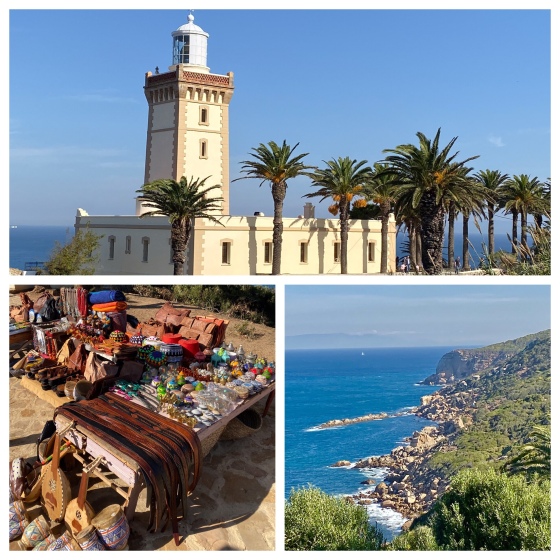 As we travelled along the beach, there were many opportunities for a ride on a camel or burro. We chose not to, but had to stop for the obligatory photo.

The Caves of Hercules is an archaeological cave complex located  below Cap Spartel. The cave has two openings, one to sea and one to land. The sea opening is known as “The Map of Africa”. The cave itself is part natural and part man-made. The man-made part was used by the Berber people to cut stone wheels from the walls, to make millstones, thus expanding the cave considerably.

Our primary destination for the day was the seaside town of Asilah, a fortified town about 31 km south of Tangier. Asilah is a bright and fresh little destination that provides a taste of Spain mixed with Moroccan traditions. This town, adorned with artwork, can be explored by foot in just a few hours, however its size doesn’t detract from its beauty. Paintings fill the white washed walls of the old part of town and each lane offers new visual delights.

Returning to Tangier, Yahya took us on a tour of many of the outlying areas of the city. We saw areas of poverty, but also areas where the ‘middle class’ live and work. We also travelled through the touristy beach area, which abounds with high rise hotels and sandy beaches. 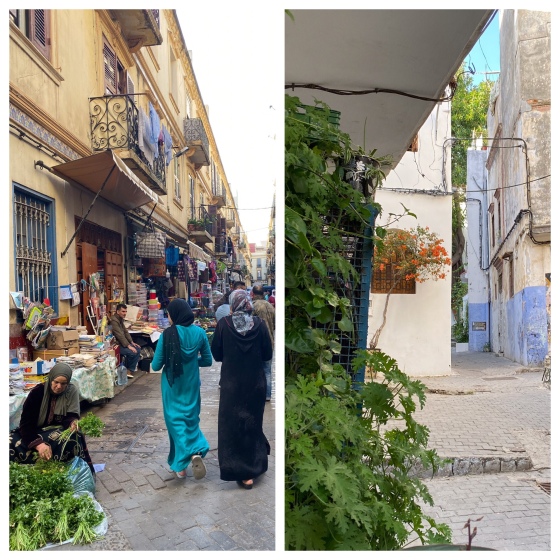 Traffic in Tangier is very chaotic, with cars, taxis and a multitude of cycle carts (as pictured above). Yahya informed us that collisions are very frequent. It appeared to us that even on highways, the lines separating lanes are at best, suggestions. Most drivers (including ours) straddle the line except when necessary to move over.

We spent a relaxing morning wandering along the port and down the beach – it was a lovely warm day for us – but definitely not a busy day on the beach.

The Grand Socco is a big, bustling square that joins the old town with the new. It is the entrance to a market that was much less organized than the medina area adjacent to our hotel. We didn’t linger as we really didn’t see anything that was of interest to us! 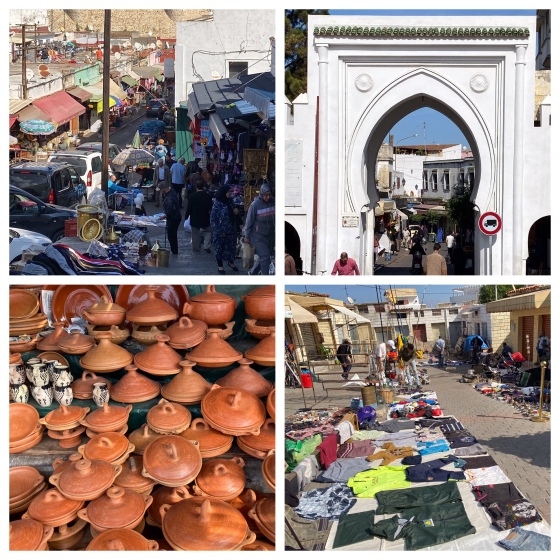 Many reviews and guidebooks rave about the food in Tangier. Perhaps we weren’t as adventurous as we could have been and didn’t discover some hidden gems…. we did have some very good meals (although one was primarily Italian), centering around tangines. We also enjoyed coffee at some local spots as well as the historic Gran Cafe de Paris.

The night lights as we walked the wall of the kasbah were amazing! 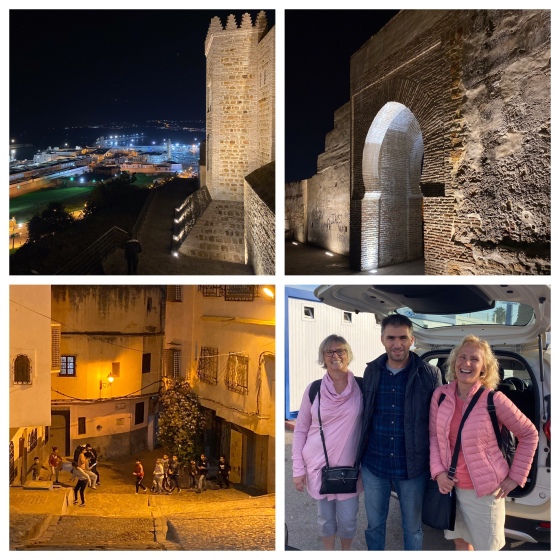 With the help of Yahya (pictured above), we felt like we looked at life in Tangier from both sides now – as Joni Mitchell would say (a shout out to my friend, Pat, who loves to incorporate a musical theme in her blogs). We saw that abject poverty does exist in sharp contrast to the very, very rich, but we also saw a thriving middle class.

Morocco has an interesting mix of culture – it is overwhelmingly a Muslim nation, reflecting it’s Arabic / Berber roots, but it sits between two continents and you see influences of both Mediterranean Europe and Africa.

Although we found Tangier a bit overwhelming at times, we are very happy we made the decision to visit and we would certainly consider traveling to other areas of Morocco in the future.