Valkenburg is renowned for caves in the sandstone hill. During the Christmas season, the tourist caves are utilized for Christmas markets and displays and tourists flock to the town. We thought it would be fun to see this and it was!

It took 3 trains to travel from Bruges to Valkenburg, but the journey went smoothly. The train station in Valkenburg, opened in 1853, is the oldest station in the Netherlands.

We were booked at the Hotel Janssen, a delightful family-run 11 room guesthouse. It was an easy 15 minute walk from the train station and we were warmly greeted by Yvonne. We would definitely recommend this hotel to anyone visiting the town.

We visited both of the Christmas markets in the caves, as well as the outdoor Santa’s village. Although the municipal market in the Gemeentegrot is advertised as the largest and grandest of the two cave markets, we preferred the Fluweelengrot (Velvet Cave). We found the Christmas displays and decorations were nicer and the vendors carried more original goods. It was however interesting to see the larger caves in the Gemeentegrot.

We also toured two other interesting cave presentations. The Mergelrijk Cave displays Christmas miniatures interweaved with sandstone sculptures in what is a coal-mining museum for the rest of the year.

The Wilhelmina Cave is known as the Winter Wonderland during the Christmas season. Located in an amusement park type atmosphere that also offers a chair lift, a luge-type ride and miniature golf, the caves contain impressive sandstone sculptures created by artists from around the world. 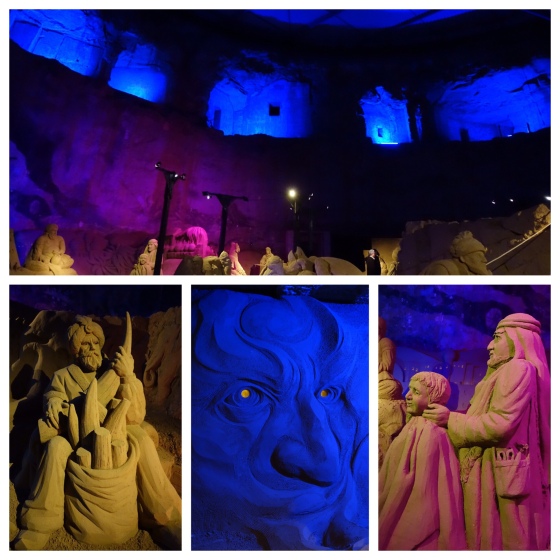 Atop the hill in Valkenburg sit the ruinst of the former castle. Construction of the original castle began in the 1100’s and it was destroyed and rebuilt a number of times. Unfortunately, the castle was heavily damaged during the Dutch Spanish wars and in 1672, King Stadholder Willem III ordered that it be destroyed to keep it from falling into French hands.

On Saturday, the Christmas parade was held. This 25 minute parade featured small floats and many of the local children dancing in the streets to a Christmas fairytales theme.

The small town obviously relies on the tourist trade as there are multitudes of hotels and restaurants. Most were well decked out for the Christmas season.

A major pastime for the locals and tourists in Valkenburg is to sit on the terraces of the many restaurants that line the main streets. They face the street, watching the people go by while drinking coffee, beer, gluwein and for many smoking. They are a hardy bunch as the temperature was cool – in Canada, our patios would definitely be closed.

Visiting Valkenburg was a unique experience and we are happy that we discovered it.

Now back to the train and off to Brussels for a couple of nights. By the way, we have determined that we overpacked, especially for train travel and cool weather when we mostly just have our coats on so you can’t see what we are wearing anyway. 🙂