Hello all! After a lengthy absence from the blogosphere, we are back! We are in Europe for 3 weeks and thought we would share the highlights of our journey with those who are interested in reading.

We left home last Thursday on a flight to London (with a delightful layover in Calgary where we were happy to visit with Kelsey & Adalyn for a couple of hours). We flew from Calgary to London on an Air Canada 787 Dreamliner and it was a great flight. The plane was nowhere near full so we had room to spread out and even got a bit of sleep.

Upon arrival at Heathrow, and quite a lengthy wait at Passport Control, we easily located the Central Bus Station and our bus to Cambridge. This trip took us into a number of towns along the way, none of which inspired me to return quickly. 🙂

As we arrived at our bus stop in Cambridge, there was our reason for coming! Our daughter Kristin – who is living there for a year as she studies for her MBA at the University of Cambridge. It was great to see her!!

We spent our four days in and around central Cambridge. Kristin was a great tour guide. It was quite interesting to see how the University is basically spread over the central area. There is no ‘campus’ as we would know it at a North American university.

The University of Cambridge was established in 1209. Apparently, at that time, there was a murder in Oxford and the faculty and students were under suspicion. A number of them fled to Cambridge and established their own university in that city.

The university has 31 colleges. Every student belongs to a College. This is not related to your area of study – they are made up of students from all faculties. Kristin is a member of Clare Hall College – this college is strictly for post-graduate level students, whereas some of the others will have both undergrads and post-grads. 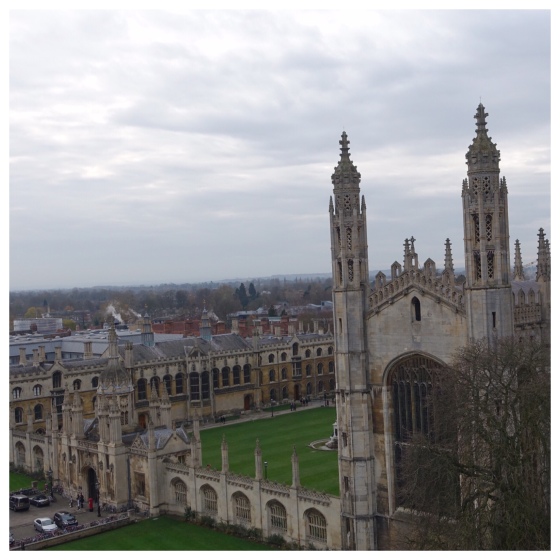 Kris lives in one of the houses of Clare Hall. It is named after Leslie Barnett – my lab friends will be interested to know that Leslie was a microbiologist. Kristin has a lovely room and shares a kitchen and common areas with her housemates.

The Colleges, as well as the various faculty buildings are scattered across Cambridge, integrated into the city itself. Kristin specifically attends the Judge Business School. What now looks like a modern building is constructed around what used to be a hospital. Carved in the stone above the door of the adjacent restaurant is ‘Outpatients”.

We spent much of our time wandering the streets, checking out the architecture of the town buildings, as well as the many Colleges. Most of the Colleges are closed to visitors, but Kristin was able to take us into many of them. Some of the more prestigious colleges offer visitors entrance with an admission fee, but we have left those for our next visit.

There are a great many churches in the central area. One of the most interesting was the Church of St Mary, where we were able to climb the bell tower for great views of the city below.

One of primary sporting activities in Cambridge is punting on the River Cam. Kris tells us that it is not easy to do (having tried it somewhat successfully with friends) and we felt it would be better to just take a ride in a punt with a tour guide/punter. It was a fun way to see the ‘Backs’ of many of the colleges.

Legend has it that the Mathematical Bridge was designed by Isaac Newton. It interestingly does not have any curved boards so definitely required a mathematical solution.

When in England, one must have ‘High Tea’. We partook of this on Sunday afternoon at ‘Six’ in the Varsity Hotel. It was a treat!

We enjoyed lunch / dinner in a number of pubs, some with great history. The ceiling in The Eagle, Cambridge’s oldest pub, is signed by returning soldiers, and it was also in this venerable establishment that Watson & Crick announced their discovery of the structure of DNA.

The Anchor is where Pink Floyd played their first public concert (they had previously entertained at one of the local Colleges).

It is the season for mulled wine and Kris & I tried it out at a onumber of pubs.

Cambridge has a Christmas season amusement park. It’s a bit strange but seems to be a hit with the locals. It does have an outdoor ice rink, which was one of Kristin’s first stops after our arrival as we had brought her skates over with us. She was missing them!!

We thoroughly enjoyed our time in Cambridge (of course, most importantly visiting our girl, seeing where & how she lives and meeting many of her new friends). We are already looking forward to returning in the spring.

Now we are off on the Eurostar to Belgium to visit some Christmas markets. Stay tuned!

2 thoughts on “Cambridge: City of Learning and Our Girl”