On our second day, we met Helena & Valerei at 0900 h and were off for another great day. The first stop was St Nicholas Cathedral. Built between 1753 and 1762, this blue and white Baroque cathedral is one of St. Petersburg’s most beautiful. In the 18th century, this part of town was the sailors’ quarter, which is why the cathedral was named after Nicholas – the patron saint of sailors, and why locals sometimes call it “the sailor’s church”. It surprisingly has worship areas on two-stories with low ceilings and a warm and inviting interior. At the church gates on the Kryukov canal, there is an impressive four-story bell tower. 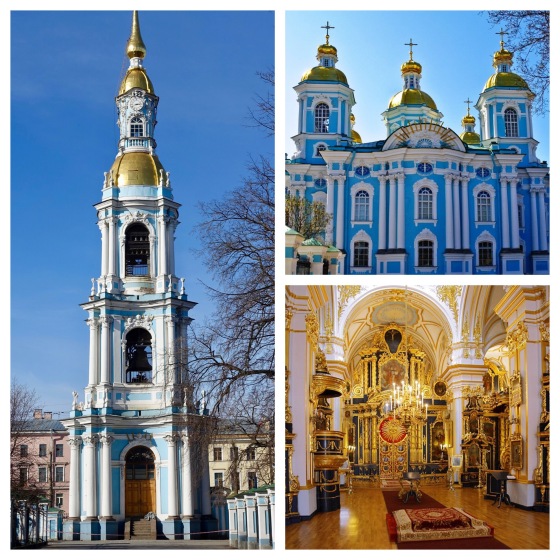 After the Cathedral, we visited the Peter and Paul Fortress. The first structure to be built in St. Petersburg, and thus the birthplace of the city, it never served its intended defensive function. Instead it has had a rich, hugely varied, and sometimes sinister history as a military base, a home of government departments, the burial ground of the Russian Imperial family, the site of groundbreaking scientific experiments, and a forbidding jail that held some of Russia’s most prominent political prisoners.

The Cathedral of Saints Peter and Paul is the oldest church in St. Petersburg, and also the second-tallest building in the city (after the television tower). The church, built in Baroque style, was consecrated on June 29, 1733. It is intimately linked to both the history of the city and to the Romanov dynasty, as it is home to the graves of nearly all the rulers of Russia since Peter the Great, including Peter, both Catherines, Elizabeth, all three Alexanders, Paul, Peter III, Anne – and now both Nicholases as well, as the remains of Nicholas II and his family were re-interred in the small Chapel of St. Catherine on July 17, 1998. 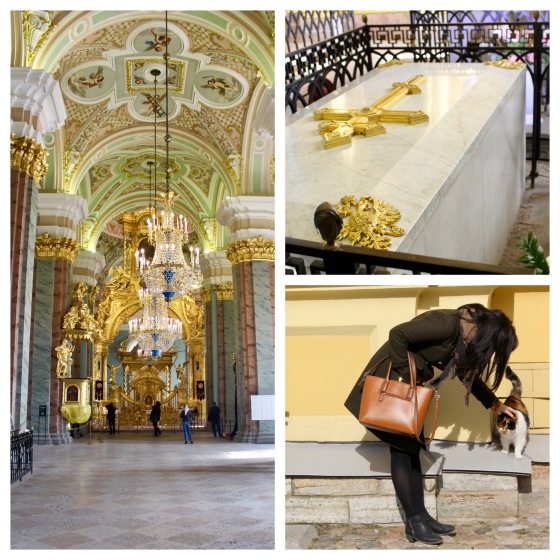 We were lucky to spot the resident cat inside the cathedral, and then again outside where Justine made friends with him. His job apparently is to keep the mouse population under control, and judging by his size, he does this well!

Valerei drove us around the city, while Helena described many of the sights we passed. We stopped in a few locations to enjoy the sights and stretch our legs. We also had a coffee break, where shots of vodka and Russian liqueur were provided.

This church was built between 1883 and 1907 on the site where Emperor Alexander II was fatally wounded in March 1881. The exterior is richly adorned and awe-inspiring….

And then you enter! It takes your breath away.

There are over 7500 square feet of mosaics. Interestingly, the Bolsheviks had painted over the mosaics with oil paint and this all had to be painstakingly removed to restore the images to their original glory. Another impressive element of the church is the extravagant shrine constructed on the spot where Alexander II was fatally wounded, which has maintained a special place within the church’s interior. Completed in July 1907, four columns of gray violet jasper serve as the base of the shrine. Rising up the shrine, small rectangular columns unite the carved stone awning and the decorated mosaic icons with images of the patron saint of the Romanov family.

We stopped for a wonderful 4 course lunch that Helena had arranged for us at Pectopah.

Our final destination was the Winter Palace, the first grand imperial residence in St Petersburg,  which is now home to the Hermitage, the biggest museum in the world. The official residence of the Russian tsars from 1732 to 1917, almost all the Romanovs starting from Catherine the Great resided there. The palace had hundreds of rooms; many of them were State Halls, the interiors of which are well-preserved. 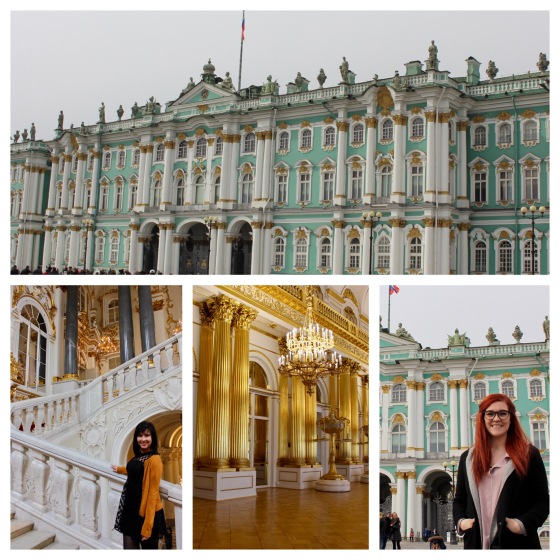 The Hermitage Museum collections, of which only a small part is on permanent display, comprise over three million items including the largest collection of paintings in the world. The collections occupy a large complex of six historic buildings along Palace Embankment, including the Winter Palace.

Helena took us on an excellent tour, visiting the Palace rooms, and Hermitage exhibits including works by Da Vinci, Rembrandt, Matisse, Michelangelo and many more. Helena’s excellent descriptions were perfect for the art illiterate such as Harvey and I. 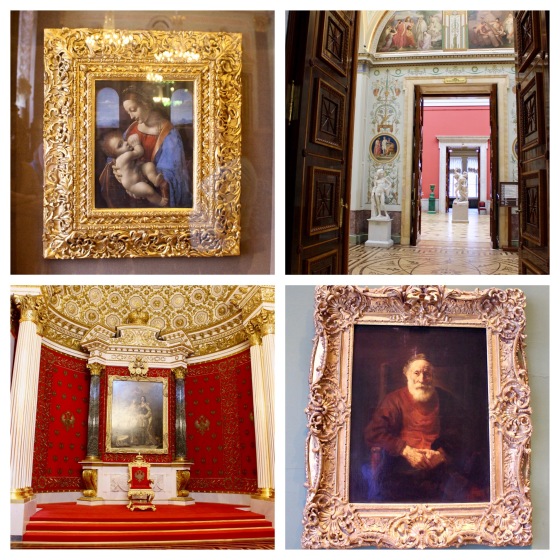 After leaving the Hermitage, it was unfortunately time for us to reboard the ship for our overnight voyage back to Helsinki.

St Petersburg is a beautiful city. Peter the Great is responsible for most of the Russian baroque architecture – and I would echo ‘the Great’. It is beautiful and certainly is the city of palaces.

We are so happy that we chose to take this excursion. When the attack in the St P metro happened only 2 days before we were set to go there, we wondered if we should go. We contacted Katya at the tour company and she reassured us that all would be well and we are glad that we took her advice and stuck with our plans.

We would all love to return to St Petersburg in the future, and would have no qualms in tackling it on our own now that we have experienced it with our excellent guide!