St John’s is one of the oldest cities in North America and Newfoundland’s primary port. We found it to be the perfect blend of modern sophisticated city and small historic town. We spent three nights at the Murray Premises Hotel, located across the street from the harbour in the centre of the downtown. Built in 1846, the Murray Premises, a National Historic Site, is the oldest collection of mercantile buildings related to the fishing industry in Newfoundland and Labrador. Since 2000, the premises has been renovated to become one of St John’s finest boutique hotels. Our room, on the 4th floor under the roof gables, was unique and wonderful.

The location of St John’s and its perfectly sheltered harbour has led to its importance in Canada’s history, attracting European explorers and fishermen and going on to be a strategic defence location for North America.

Signal Hill rises 160 meters above the narrow approach to the harbour. This area was the site of many battles between the French and English. The Signal Hill National Historic Site recalls the town’s historic past and communications triumph, as well as offering coastal hikes against sweeping views overlooking the Atlantic. Signal Hill was the site of St. John’s harbour defences from the 17th century to the Second World War and where Guglielmo Marconi received the world’s first transatlantic wireless signal in 1901.

Perched on a rugged cliff at North America’s most easterly point lies Cape Spear Lighthouse – the oldest surviving lighthouse in the province, and also a National Historic Site. Constructed in 1836, the Cape Spear Lighthouse consists of a stone light tower surrounded by the lightkeeper’s residence. In 1955 a new lighthouse tower was built on the site using the active light from the original lighthouse.

Part of St John’s charm comes from the many colourful houses in the city. Often referred to as “Jelly Bean Houses”, the homeowners must take great pride in order to keep up the bright colours in a coastal environment.

One of the highlights of St John’s for us was fabulous food. We had great pub food at Bridie Malloy’s on George Street – cod au gratin and shepherd’s pie.

As an aside, we had heard that George Street was a happening place – not so much in October. We stopped to eat, but didn’t see much action.

We were told THE place for fish and chips was Ches’s Famous Fish and Chips, and it did not disappoint. Our seafood platters, with lightly battered cod, shrimp and scallops, as well as crispy chips, were excellent. Also, the local quidi vidi beer was the perfect accompaniment.

But the absolute highlight was dinner at Raymonds Restaurant. Located in a historic building overlooking the harbour, Raymonds was voted Canada’s best restaurant in 2015. It was superb! We chose the 5 course tasting menu, with wine pairing. Each course was a new delight and the descriptions by our waiter, Mitchell, added to the experience. The sommelier chose perfect wines to complement each course, providing us with her anecdotes about each of her choices. 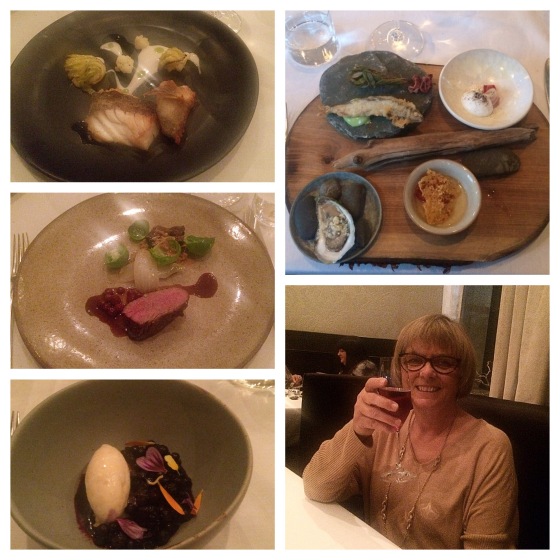 We are so pleased that we chose to visit Newfoundland on this vacation!

Now, off to Nova Scotia…..stay tuned!