A couple of weeks ago, we took a trip to St. Louis and Kansas City with our traveling companions, Larry & Debbie. In this blog entry, I’d like to tell you some of the highlights of our four days in St. Louis, the Gateway to the West.

Harvey and I had visited St. Louis in the summer of 2012 – but only for two nights and in the midst of a major heat wave – so we really hadn’t done much exploring, other than the major tourist sites – the famous Arch and the Anheuser-Busch brewery. This trip, we had four days to get to know the city. Our expert trip planner, Debbie, had done excellent research and we travelled about the city like native St. Louisans (really, that’s what they are called).

Our hotel was located near the airport and had the most friendly staff I have ever encountered in a mainstream hotel. By the time we left, we were hugging them good-bye! We used the MetroLink light rail train to travel into the city core for the first couple of days. This was a very efficient travel mode – even on the evening train when the driver announced that the train was ‘defective’ and we crawled into the last stop at the airport!

We toured most of the major neighbourhoods in St. Louis. Here’s a recap:

The skyline of downtown St. Louis is dominated by the Gateway Arch. Standing 630 feet tall, the Arch is the tallest man-made monument in the U.S. and is celebrating 50 years in 2015. The grounds of the Arch are currently undergoing a major renovation, which is expected to be completed in Spring 2017.

Nearby is Laclede’s Landing, which combines rich St. Louis history with modern entertainment. Generally you can stroll along the riverfront, but access is limited at this time due to the major construction surrounding the Arch.

The “new” Busch Stadium was opened in 2006 and is home to the St. Louis Cardinals. It looks like it would be a great place to watch a ballgame!

Directly adjacent to the stadium is Ballpark Village. This entertainment complex actually occupies the area where the “old” Busch Stadium was located. We stopped in for a delightful lunch at the Budweiser Brewhouse and while there, were able to watch a live interview with Bob Gibson. Larry was especially pleased with this – as he was the only one of the four of us who actually knew who Bob Gibson was. Bob is a retired baseball pitcher who played 17 seasons in Major League Baseball for the St. Louis Cardinals and holds a significant place in the team history. Larry apparently has a couple of his baseball cards in his collection. Despite the ignorance of the rest of us, we all thoroughly enjoyed listening to the interview of this man, who is nearing 80 year of age and was very informative and entertaining.

Also located nearby are the Scottrade Center, where the St. Louis Blues play our game, and the Edwards Jones Dome, where the Rams tackle football.

We wondered through the Citygarden, a vibrant and serene blending of lush plantings and internationally renowned sculptures with delights of water, stone, architecture and design. 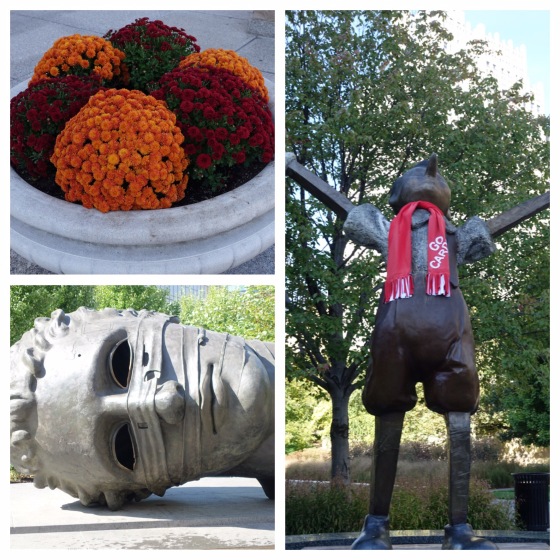 We also stopped in at Union Station. This National Historic Landmark was once the world’s largest and busiest train station but was converted in the early 1980s into a hotel, shopping center, and entertainment complex and today, only serves local rail (MetroLink) transit passengers.

Forest Park occupies 1,293 acres in the center of the St. Louis and is the seventh largest urban park in the United States. It contains St. Louis’ major museums – the Saint Louis Art Museum and the Missouri History Museum – as well as the Saint Louis Science Center, Saint Louis Zoo, and The Muny, which is the country’s biggest outdoor theatre. It was a lovely spot for a lengthy stroll, despite a brief rain shower which sent us scurrying for cover under a tree. 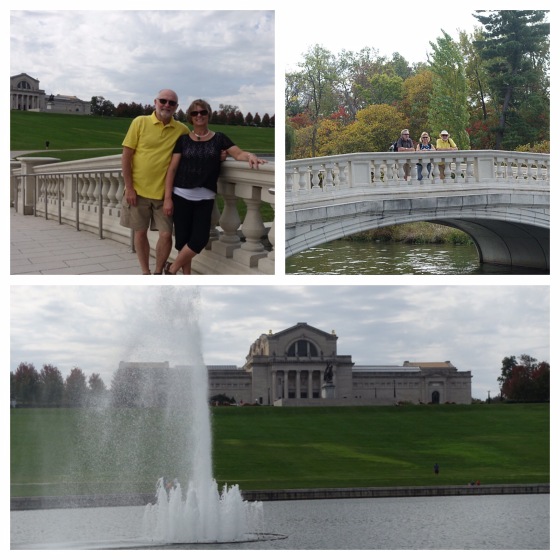 Perched on the eastern edge of Forest Park and over a century old, the chic Central West End is full of charming sidewalk cafés, galleries, antique shops, restaurants, boutiques and pubs. It’s a little European, a little New York and totally St. Louis. The Cathedral Basilica of Saint Louis was completed in 1914 and is the mother church of the Archdiocese of St. Louis. The World Chess Hall of Fame is also located in the Central West End. We enjoyed a great pumpkin brew at one of the many local establishments!

Grand Center serves as the cultural hub of the region, and is home to many theaters, with their neon signs lighting up the street in the evening. 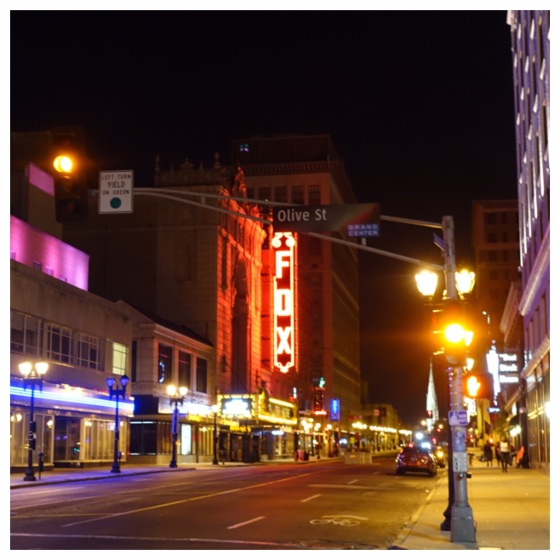 This neighborhood boasts an impressive collection of beautiful Victorian homes and could be described as ‘urban chic.’ We enjoyed checking out the exterior grandeur of many of these homes.

The city’s oldest neighbourhood exhibits a leisurely pace and an appreciation of days gone by. The historic streets are lined with red brick townhomes that house live music clubs and unique restaurants. We walked to Soulard to experience their annual Oktoberfest. While sipping on the ever present ‘Bud’, we enjoyed a variety of live music on three separate stages – the oldest Blues band in St. Louis, a traditional German ‘oompah’ band and an interesting classic rock polka band.

Everything is colorful here – even the fire hydrants are painted red, white and green. Its epicenter is one intersection that sums it up perfectly, with St. Ambrose Catholic Church on one corner, an Italian bakery/restaurant on another, an import shop across the street, and a neighborhood tavern/bocce garden on the fourth corner.

We enjoyed a coffee house, an corner Italian sandwich shop and a lovely dinner (but more on that later).

The area is nicknamed “The Loop”after an old streetcar turnaround and is the original home to Chuck Berry. The highlight of The Loop is Delmar Boulevard, an eclectic main drag lined with an array of ethnic and American restaurants, music clubs, coffee shops, vintage clothing stores and boutiques. It’s an easy place to spend a full day exploring shops that offer everything from tattoos and piercings to books and records. Larry certainly spent considerable time checking out the records, but he didn’t seem to want to follow through his suggestion that we stop at a tattoo shop. 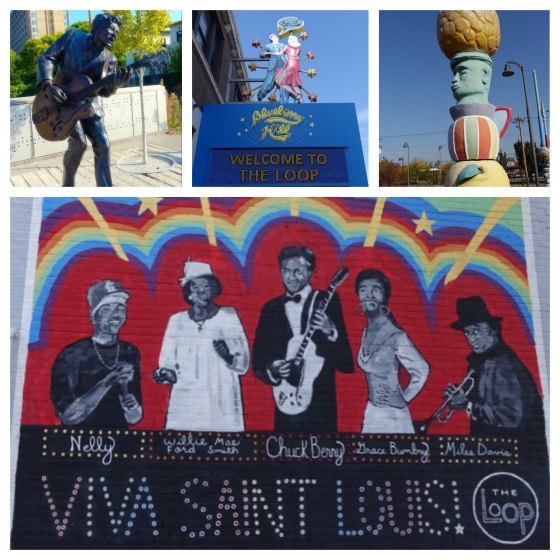 Bordering The Loop is University City:

University City was founded by publisher Edward Gardner Lewis, who began developing the location in 1903 around his publishing complex for Woman’s Magazine and Woman’s Farm Journal. A number of historic buildings, including the beautiful City Hall, are mixed in with the century old homes, some of which are lovely and some which require some modern TLC. 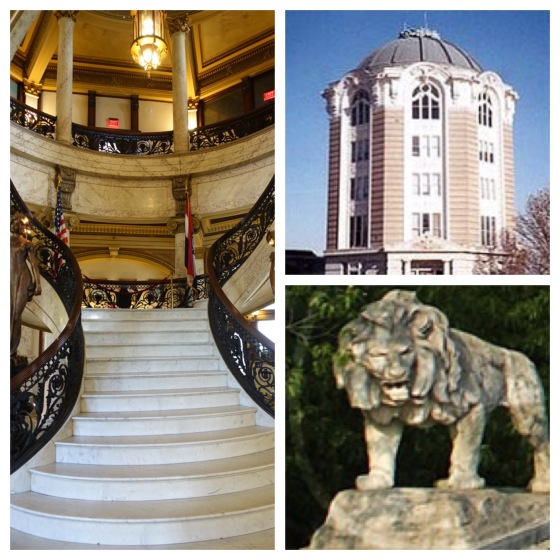 Webster Groves is a fashionable neighbourhood with cozy restaurants, boutiques and century-old homes, more than 300 which are listed on the National Register of Historic Places. We wandered for a while, stopped in for an afternoon refreshment and drove around the tree-lined streets to view the exteriors of many of the beautiful homes.

We enjoyed just wandering around the areas and learning about St. Louis. It is an interesting city that is currently dealing with some societal challenges, not the least of which is a rising murder rate. I certainly don’t want to imply that we ever felt unsafe as the murders are definitely concentrated in specific areas and specific demographics. We found interesting and enlightening articles about this issue in a local publication, the Riverfront Times. If you are interested in reading more – http://www.riverfronttimes.com/newsblog/2015/10/01/st-louis-has-the-highest-murder-rate-in-the-nation and http://www.riverfronttimes.com/newsblog/2015/10/07/st-louis-murder-map-tracks-killing-by-neighborhood .

As always, we tried out a number of local restaurants, bars and coffee houses. Stay tune for the details on those in St. Louis and Kansas City soon, as well as a post about our days in Kansas City.