Monday was travel day for us – leaving Sicily is bittersweet. We very much enjoyed the small sampling of Sicily that we experienced. The sites were interesting and the people were so very friendly. But we are quite looking forward to our next and final stop on this trip, the Amalfi Coast.

To start our day – huzzah! She has emerged! We were able to finally view the summit of the looming Mount Etna! 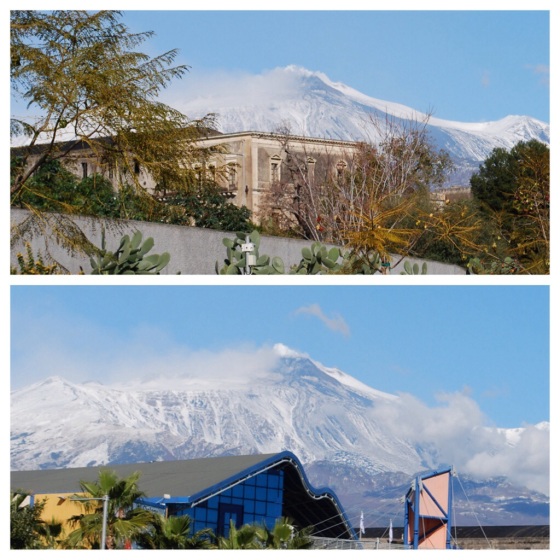 We of course had to once again travel by ferry to leave the island of Sicily, but this time it was a smaller, open ferry.

Today, we travelled ~600km, on the Autostrade, through a wide variety of terrain – seacoast, plains, hills, valleys and mountains. You will recall I promised to count the numbers of bridges and tunnels we encountered. That may have been a mistake on my part, as it became quite tedious. But I persevered and I bring you the information that you have all been waiting for.

We travelled through 127 tunnels, totalling 69 km, and over 331 stretches of elevated roadway, measuring 60 km. That is over 20% of our trip. The shortest tunnel was 42 m long and the shortest bridge was 10 m. The longest were 2.4 km and 1.8 km. The tunnels are through hills and mountains and even under ancient ruins.

The bridges span dips, valleys, gorges, streams and rivers. All in all, it is a feat in road building. However, as you can see in the signs, each tunnel or bridge is named and a sign is erected at each end listing the name and length. Does this seem like a make-work project to anyone else, as it does to me? I think the time and money could be better spent on the myriad of construction projects we encountered where there appeared to be no activity occurring. Just my opinion.

As we neared Sorrento, Sally led us through a maze of small, narrow, very congested (once again with both moving and parked cars, scooters and pedestrians) streets in towns that we have no idea where or what they were. We are unsure if this was the easiest way – or just the dreaded GPS ‘fastest route’.

But we made it safely to our hotel. I must commend my husband’s driving skills. I was stressed just being a passenger, while he remains calm, manoeuvring the car through the narrowest and trickiest predicaments!

Our hotel is fabulous! I am always anxious, having booked on hotels.com and relying on on-line reviews. All of our hotels on the trip have turned out to be great, but we definitely saved the best for the last. It was so nice to be greeted with smiles and information, to hand over the car keys for someone to handle the car, and to have a distinguished gent named Francesco get us settled in our room. 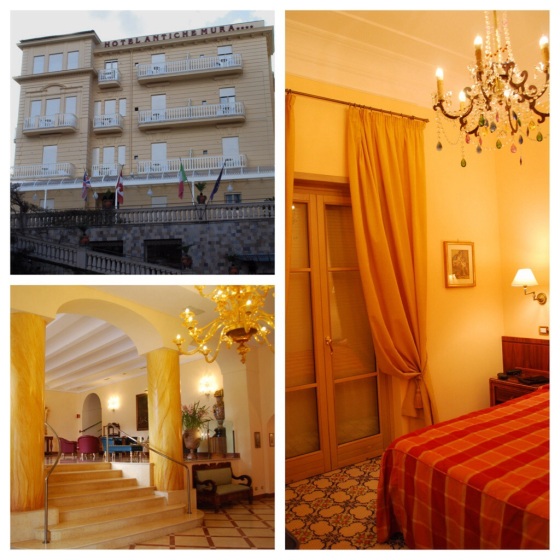 After a bit of a break in our room, we hunted down a restaurant for dinner. Our bruschetta, salad, seafood fusilli and gnocchi were good, but certainly not up to the standard of our dinner from the night before. Ah well, it was close and they did finish our meal with a shot of limoncello.

PS – another note on Harv’s driving. When we were in Germany, he recorded speeds of 200 kph on the autobahn. Our 1 litre, 3 cylinder Fiesta isn’t quite up to that action, but he did get it wound up a bit today.