We have been back in Alberta for a week now, the jet lag has faded and I have had time to look over our pictures and think about the trip. So some final reflections on the places we visited….

Berlin
Berlin is full of history – with such significant 20th century events – and museums abound, telling those stories and those of more distant history, as well as featuring an abundance of art treasures. It is a gritty city; outside the tourist centre, graffiti covers almost any reachable surface and in the early morning, you encounter litter of bottles and fast food wrappers. But it gives the impression of a livable city – unpretentious and vibrant, full of new construction as the former East Berlin still grows, 24 years after the fall of the wall. Also, the local people were so helpful – offering assistance when we hadn’t even asked!

Having visited Berlin, would I return? It’s not on the top of the list, but given the opportunity, I wouldn’t pass it by. I would like to delve a bit more into the history, by taking a walking tour and spending more time on Museum Island. I would also like to visit Potsdam and take a boat ride on the Spree.

Dresden
We arrived in Dresden in the early afternoon and departed the next morning, so my impressions are fleeting. The central core we visited was an interesting mix of the old and new – or perhaps the new and the new made to look old, as 75% of the Old Town was destroyed by WWII bombing and many of the historical sights have been reconstructed. We were in Dresden on the Day of German Unity, a national holiday commemorating the reunification in 1990, so my impression is of a busy, fun area, full of local German families enjoying their day. Probably not the scene every day, but it made for a fun day for us as we mingled with the locals, enjoying wurst and Gluwein (hot mulled wine).

On another visit to Dresden (again, not topping the list, but worth consideration if in the area) , I would take the time to actually know what I was looking at, rather than just admiring the fine Baroque architecture. I would like to visit the interior of the Frauenkirche – this church from 1743 was completely destroyed by bombing, but was painstakingly rebuilt with international donations and reopened recently. Unfortunately, due to the holiday, the line-up was prohibitive when we were there. Other sights to include on a possible future visit are the Historic Green Vault, which houses a glittering Baroque treasury, and Volkswagon’s Transparent Factory where the Phaeton is produced.

Prague
Ah, Prague – what a beautiful city! I would describe ‘Praha’ as charming, historic and so unique. The architecture is amazing – the city of spires and an eclectic mix of architecture, ranging from Gothic and Renaissance to Baroque and Art Nouveau. All of the people we encountered were so friendly and made us feel welcome in their city. The opportunities for entertainment are many and varied – street performers, classical concerts, black light theatre…… And the food – we ate in small, local restaurants that rival some of the best I have encountered anywhere.

I would love to return to Prague – to wander the streets, to try more small restaurants and to further explore the sights – more time in the Castle and Jewish Quarters, a concert at the Opera House and a paddle boat on the river. 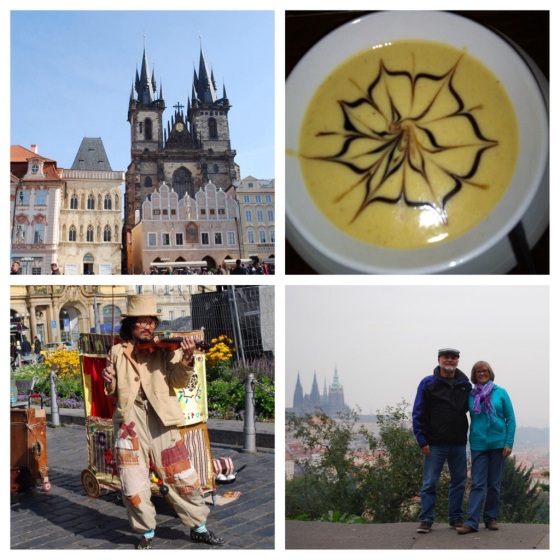 Cesky Krumlov
Cesky Krumlov is a well-preserved fairy tale town. The narrow streets are fun to stroll through and the castle gardens are beautiful. The small town is probably crazy during the height of tourist season, but on an October afternoon and evening, it was delightful.

If passing by Krumlov in the future, I would probably stop in for a night at the wonderful Penzion Delanta and enjoy the ambiance of the town again. 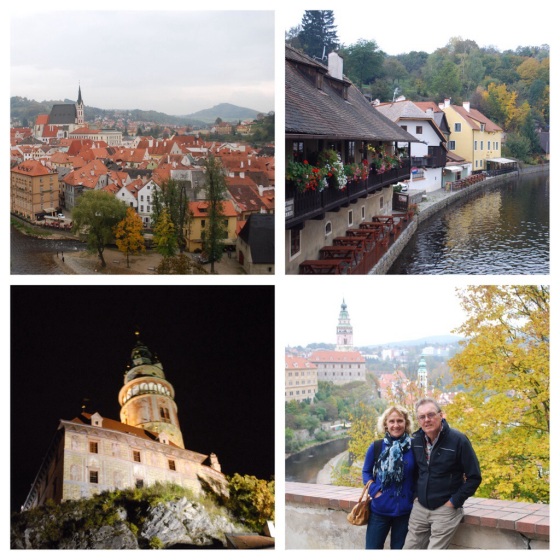 Vienna
Vienna is an elegant, opulent city, with wide boulevards, beautiful architecture, grand classical music and shopping for the rich and famous. But away from the central area, it is home to small excellent restaurants and coffee shops, concerts in historic venues and everyday people enjoying their lives.

I can’t quite put my finger on why, but Vienna captivated my interest and I would love to return. I would visit the Opera House, attend another concert and a church service in one of the beautiful churches, watch the Lipizaner Stallions practice or perform and spend an evening at a wine tavern. I would love to take a day cruise through the Danube Valley or return to visit the Christmas market in December!

Salzburg shows a different side of Austria from Vienna. It has a well preserved old town, a foreboding fortress, beautiful gardens, pride in Mozart everywhere and the Sound of Music! But it also seems fresh, outdoorsy and fun!

We didn’t have enough time in Salzburg and I would love to return to visit the Fortress, Hellbrunn Castle, spend another evening at the Augustiner Braustubl and travel to the lakes district.

Rothenburg ob der Tauber
It was a treat to visit Rothenburg. This well-preserved medieval walled town is visited by 2.5 million tourists per year, and there is a reason why! It is magical, transporting you to the Middle Ages when it was a free imperial city and a major trading stop. There are sights to see, and we enjoyed visiting some of them, but it was such fun to just explore the many small narrow streets, walk the wall, wander through the beautiful countryside outside the wall and snap photos at every turn. The Nightwatchman’s Tour is a must, again accentuating the feeling of being in the Middle Ages while outlining the history of the town.

I think we covered most every street inside the walls of old Rothenburg, so as much as we loved Rothenburg, we probably wouldn’t return – unless it was to share this fabulous experience with someone who hadn’t previously visited. 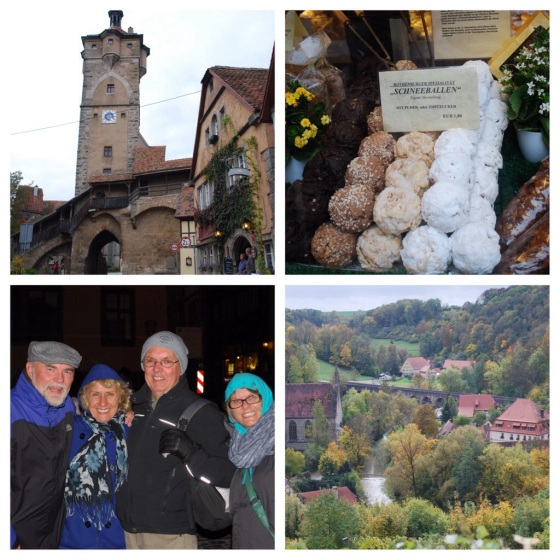 Wurzburg
Wurzburg wasn’t even on our trip itinerary, but we had some time to kill enroute from Rothenburg to Frankfurt, so we stopped in and were pleased that we did. We only spent a few hours, so again my impressions are from a quick look. As we drove in and out of the city, it could have been most any large city anywhere – there appeared to be urban sprawl and we could see a city skyline of tall buildings (not something we had typically seen on this trip). The Old Town that we visited was a lively, downtown area with a mix of old and new and we enjoyed wandering there.

If I were to have some time to spare on a future trip beginning or ending in Frankfurt, I might again stop in Wurzburg and further explore the Residenz Palace and the Marienberg Fortress. 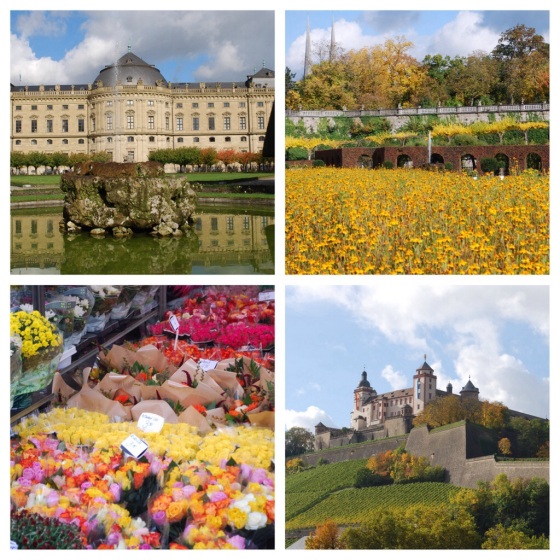 It was a marvellous trip – we saw so many wonderful sights, learned so much history, ate great food, drank great beer, wine & coffee and walked many kilometres. We are so lucky to be able to take trips like this and I can hardly wait for next time! Stay tuned for the next stops along our long and winding journey!